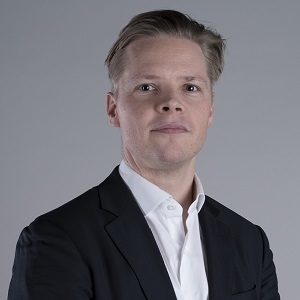 Christian Bergholt Rom is Portfolio Manager for DNB Miljøinvest and DNB Fund Renewal Energy, and also in charge of the long-short and long-only renewable energy strategies in the company.

After about four years as an Equity Analyst in Carnegie Securities, Christian joined the company in 2010 as part of the Renewable Energy Team and in charge of the long-short and long-only renewal energy strategies in the company.

Christian holds an MSc in Business and Economics from BI Norwegian Business School.

Europe's energy mix will have to be completely rearranged when it comes to ensuring the supply of fossil fuels. The impending supply bottlenecks due to possible interruptions in the delivery of Russian natural gas and concerns about the affordability of energy are currently alarming key sectors throughout Europe, from chemicals to the metal industry and glass production. At the same time, the strains from Corona and the devastating events in Ukraine are also reaching consumers, with the eurozone recording record inflation rates. The strongest driver is the high cost of energy.

This environment - Europe obtains up to 40 percent of its gas from Russia - impressively underlines the need to reduce both regional and fossil fuel energy dependencies and to really accelerate the energy transition. The current situation is also a reminder of the past, heavy dependence of the U.S. and China on the unstable East before the discoveries of shale gas and oil about ten years ago.

In order to achieve the goal of energy independence, negative effects on global emissions can be expected, at least in the short term, if outdated technologies such as coal-fired power plants would have to be used for electricity generation in Europe for longer than planned. But while it will be difficult to scale renewables, such as offshore wind, and their supply channels within at least the next three to five years, for example, due to lengthy permitting processes, a move to reduce dependencies is identifiable as a catalyst for overall accelerated decarbonization and diversification of energy supply in the medium term.

Plug Power, Vestas, Sika: These are the Game Changers

All the more reason for the motto "All hands on deck!" to apply to the entire range of renewable energies from now on. Because everything is needed - and in addition, everyone must now also do their part to save more energy. We need wind power and solar energy, biofuels, green hydrogen and modern heat pumps. We need investments in independent renewable energy producers, Independent Power Producers (IPPs), in disruptive technologies to generate and store energy, in the expansion of grids, but also in innovative products and materials, services and software to achieve greater energy efficiency.

In addition to long-term growth prospects and profits, investors want to see a sustainable positive impact on the transformation process towards the net zero target, i.e. carbon neutrality.

One example is Plug Power, a leader in fuel cells.The company is revolutionizing the forklift market in Europe with a disruptive technology for generating, storing and refueling green hydrogen for customers such as Walmart, Amazon and Carrefour. The company is capitalizing on its product superiority relative to battery-powered forklifts and has raised capital at very attractive prices to replace hydrogen that is not carbon-neutral with green hydrogen. The company is doing so with the help of further subsidies through President Joe Biden's Build-Back-Better plan. Moreover, a look into the future shows further potential - for example, in the production of green ammonia, which could completely change the global fertilizer market. Other examples include Vestas, a leading global manufacturer of wind turbines from Denmark, the Swiss company Sika, which supplies energy-saving materials for the construction industry, from the rare earths sector, sustainable companies such as Australia's Lynas, LeydenJar and AMG Advanced Metallurgical Group from the Netherlands, or from the switches and sensors sector Amphenol Corp and Schneider Electric SE.

Despite rising energy prices, the transition to renewable energies will result in the reduction of energy and electricity prices again in the medium term. Wind and solar energy have already become competitive on a cost basis for years - in 2020, for example, the marginal cost of operating a gas or coal-fired power plant was $90 to $100 per megawatt hour, compared to $40 to $50 per megawatt hour for wind and solar.This is a trend that has just begun and will continue over the next few years. Taking a look at the energy mix throughout the centuries, one sees the substitution of wood for coal, as well as coal for petroleum gases. In another fifty to seventy years, the majority will be renewables.