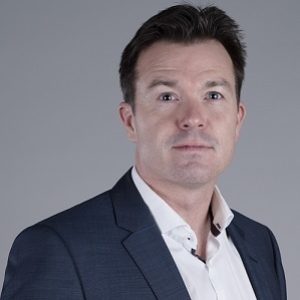 Anders joined DNB Asset Management in 1998 as Portfolio Manager for the Norwegian technology portfolios. Before joining the company he served three years as a Technology Analyst at Enskilda Securities. As founding partner of the Global Technology Team, he has been Head of Global Technology Equities since 2002.

Anders Tandberg-Johansen, is Portfolio manager in the Team of DNB Fund Technology*, which has been successful for over 20 years. He discusses the pros of the gaming sector, the future of large players in tech and the magical power of AI.

Last year was challenging for the stock market. Therefore, it is time to review - and to look ahead. With a decline of 36 percent, Interactive Media & Entertainment proved to be the weakest sector in our investment universe. Contributing to this were stocks such as Google, Facebook and Snap. Telecom Services was the best performer, with a growth of just over two percent. Given a price/earnings ratio (P/E) of eleven based on earnings estimates for the next twelve months, this sector is currently the most favorably valued. Still in the portfolio Deutsche Telekom. It is a bet on the U.S. business, which is developing very well. In addition, the P/E ratio is below four.

Nevertheless, it is still not easy for us to get excited about Telecom Services. Apart from Deutsche Telekom, it is difficult to see where future growth can be generated. In addition, the European market in particular is very fragmented and in need of consolidation. Just recently, the head of Vodafone was let go. This is not a very positive signal - especially when considering that the group is in the middle of acquiring Three UK. In our view, this sector is likely to be among the losers in the coming year.

We continue to view the gaming sector as particularly promising. Although it has declined by seven percent in 2022, it is expected to grow by nine percent in 2023 and by six percent in 2024. Despite the attractive growth prospects, shares in the sector suffered losses in the post-Corona period. Now the sector is trading again at a level that opens up attractive opportunities.

The big technology names like Google, Meta, Amazon & Co were among the major winners of the Corona crisis, but have lost significant ground in the rotation from Growth to Value. Now things are returning to normal and some of these stocks are so to speak dirt cheap. We are in a very interesting situation because these companies are investing massively into the metaverse, but also into artificial intelligence. Meta, for example, the former Facebook, could become a top-notch stock against this backdrop.

One of the subsectors that is still in the early stages of growth is artificial intelligence in particular. One example is the GPT-3 text generator, which can even imitate Shakespeare, write program code and translate foreign languages and legal paragraphs. For example, one can ask the computer to write an essay or a letter.

Artificial intelligence has also changed the music industry. Classical music, for example, composed with the help of algorithms is just one example of many. There have also been advances in ophthalmic optics through AI. Here, AI lets blind people "see" again using software. Meta put $30 billion into this technology. Google, which is currently priced at a P/E ratio of 18, is also likely to play an important role in artificial intelligence. Even a recession, which is likely to be painful for the technology giant, should not change the good long-term outlook. Afterwards, however, they could present themselves even stronger.

When we invest, we prefer scalable business models with proven profitability, strong balance sheets, solid cash flows, and moderate valuations. Most recently, we invested in Google's parent Alphabet thanks to its favorable earnings multiple and because it lags the overall market. We also added to our positions in Meta and in UK media group ITV. As of the end of November, the DNB Technology Fund outperformed its benchmark index MSCI Communications Services & IT by 10.2 percentage points, despite the downturn in tech stocks, with a minus of nine percent.

*The Fund achieved an average annual return of 18.63 percent over the past ten years.