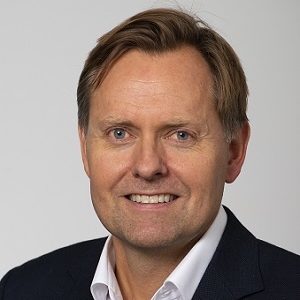 Knut Hellandsvik is our Head of Equities. He is covering all active and passive equity mandates as well as the central dealing desk and risk management. Knut joined DNB Asset Management in October 2018.

Previously Knut spent seven years as a Co-Head of Global Cash Equities in the Nordics with JP Morgan, two years as Head of International Distribution with First Securities/Swedbank and eight years as an executive with Morgan Stanley.

He holds an MBA from Stanford and an MSc from The Wharton School of University of Pennsylvania. He is fluent in English and Norwegian.

We also experienced one of the biggest divergences between winners and losers that we have ever seen. This can be explained because one part of the economy pretty much shuts down while other parts of the economy have thrived. I won’t dwell much on the past, but I do think the setup is relevant for what we can expect for 2021. The bottom line is that we have a positive outlook on the equity market for next year and here are some reasons why:

For the reasons above, we expect a continuation of the bull market and a further 10-15% increase for MSCI World during 2021 is realistic in our view. The market will not necessarily be driven by multiple expansion as we have seen for many sectors this year, but more driven by earnings growth helped by a strong and synchronous global rebound in economic growth. So how would this scenario play out in the markets?

Predicting the future is never easy so it always makes sense to think about the potential risk factors. After all, the virus is still very much raging in most of the Western World while many regional equity markets are actually up on the year and the market is not cheap in on historical context. First, we will monitor closely the success of the vaccine distribution and its effect in curbing the virus. This is a huge undertaking of unprecedented proportions – both in terms of size and speed. Secondly, a further boost to the equity market hinges on further sizeable fiscal stimuli – particularly in the US and in the EU. Thirdly, we would not underestimate the risk of inflation re-emerging as a topic next year after years of false starts. A little inflation is typically good for equities, but too much too fast becomes a problem.